Spatial Browsing: The Case For The Explorer

I recently came across something rather interesting on Ars Technica – a kind of old article, entitled “About the Finder…” (a pun based on the second menu item of the Apple menu in Mac OS 9 and earlier). In it, John Siracusa makes the case for the Spatial File Manager, and also somewhat condemns what I call the Browser File Manager (although it’s more commonly known as the navigational file manager.)

Now, Mr. Siracusa is an awesome writer, and he makes some excellent points in the article, but I have, in particular, problems with his arguments on Page 4 against the Browser File Manager. It seems all they amount to is “I’m Not Used To It, Therefore It Sucks”.

In the article, he states that the spatial file manager enables us to remember the “location” of the file, while the browser file manager makes us learn “strings” and “addresses”, forcing people to memorize text, instead of visual cues. The problem with those claims is, in reality, they are completely false. Indeed, the Browser and the Spatial employ the same methods – they simply have different ways of going about it. 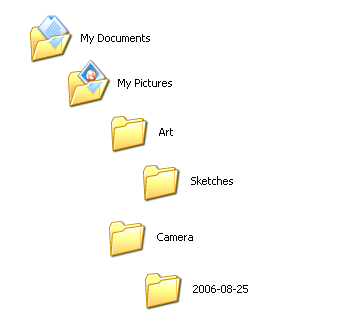 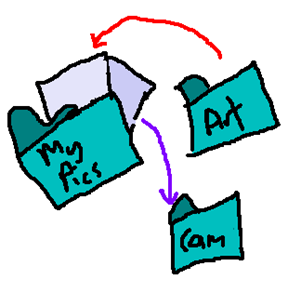 This is no different from real life; indeed, the only thing that’s changed is that it’s all so much faster. This is the point John was trying to make with the Spatial File Manager; however, the analogy works just as well for the Browser File Manager.

OK, obviously, I don’t actually think that when I’m typing it in, or browsing it in Explorer; rather it all happens automatically – muscle memory kicks in, and I don’t really have to “think” much about the journey, but instead can focus on the destination.

The reason this works is because its the same way we remember routes to and from places: walking to school, driving to work, taking the bus – we rely on landmarks to get from point A to point B. Landmarks can be anything – T-junctions, gas stations, billboards, crossings, old folk homes, they all contribute to our muscle memory. In the example I used at the beginning, I used My Pictures as the common “landmark” to get from Art to Camera.

Indeed, when you really get down to it, a file path is nothing more than a shorthand compilation of landmarks: C:\Users\markkb\Documents\test.doc is no more different than writing Home\Tree\Shops\Gas Station\Roundabout\School. That a file path would reflect a path in real life (complete with shortcuts! ^^) comes as no surprise – after all, computers are designed to reflect the reality they were created in.

Because, y’know, otherwise they wouldn’t work at all. And that’d really suck.